For a better experience on CFAL,  update your browser.
Bahamian Conch Shells 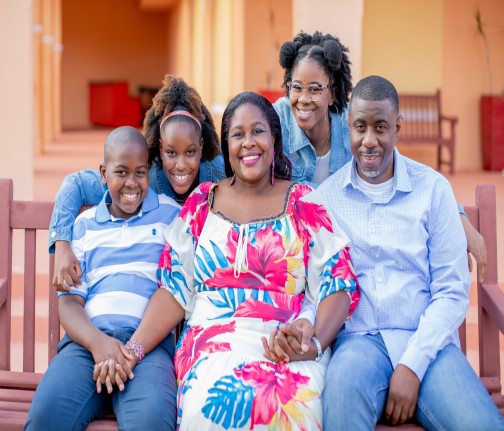 Ten-year-old Shervin Evans was diagnosed with autism, or autism spectrum disorder (ASD) at the tender age of 4. ASD refers to a broad range of conditions characterized by challenges with social skills, repetitive behaviors, speech, and nonverbal communication. The Centers for Disease Control estimates that autism affects an estimated 1 in 54 children in the United States today.* The prevalence of this disorder is also growing steadily in The Bahamas.

As Shervin’s loving family knows, there is no one size fits all approach to autism treatment and intervention. In this post, his mom, Tamara Evans, Manager of Settlements at CFAL, shares her experience raising an autistic child in the hope of helping others who may have concerns about their child’s development or may be embarking upon a similar path.

How did you come learn that Shervin was autistic?

Shervin was diagnosed with autism at the age of 4 ½. Around 18 months, we noticed he had poor eye contact, seemed afraid of crowds and loud noises like laughing and clapping, his speech was not developing compared to his older sisters when they were his age, and seemed distant or not connecting socially. These concerns became more prevalent as he got older, and after monitoring his development in these areas with the support of his pediatrician, we decided to do some testing. We started with a referral to a neurologist. The neurologist did a slew of tests including a CT scan of the brain and electroencephalogram (EEG) to rule out anything physical or abnormal with the brain. Once those tests came out clean, he referred us to a psychologist who did another slew of tests which confirmed ASD.

Did you have any experience in dealing with autism before you became concerned about his development?

I had no personal experience of dealing with Autism, but we did know people with children on the spectrum. The initial idea that Shervin may have been a child on the spectrum came through googling his symptoms.

What kind of treatment and intervention did you seek once he was diagnosed? How much progress has he made since then?

Immediately upon diagnosis we ramped up speech therapy sessions. We had engaged a speech therapist before we had a diagnosis due to his speech delay. We also started occupational therapy, placed him in a special school with an Autism unit, and got him into extracurricular activities such as swimming and soccer to help with his socialization skills.

Shervin has made tremendous progress since his initial diagnosis. He can sit in crowds and hear loud laughing and clapping with no sensory overload, his eye contact has improved. He is able to speak in sentences and now able to respond better to who, what, where questions more clearly than he did 3 years ago. He can put on and take off his clothing on his own and prep his own pizza and foods he likes. He writes in cursive and is now learning to add and subtract by regrouping three place values (yay)!

How has his diagnosis affected your family?

When Shervin first got his diagnosis, we got very busy. It was speech therapy and occupational therapy twice a week, follow up visits with the neurologist and psychologist, extra classes and extracurricular activities. There was no time to delay, we thought. We understood early that if we worked on his plan of care aggressively, his chances of improving his speech (receptive and conversational) while balancing his childhood needs would bode well for a successful outcome.

My husband and I work as a team and include our girls in the process. They were very active as well, so it was easy to include some of his social skill building activities around their activities. It was sometimes difficult because that meant him being in crowds and us having to sit away from the noise at times. It meant sitting outside the door at a movie theatre with him as the girls watched a movie or finding a spot outside a sporting event to have him engaged for hours while they competed or sitting in the foyer at church so he can roll his playdoh during service.

We knew that no matter what his behavior was like, we were not going to keep him at home. We move as a family unit and we dealt with the various changes and stages as a family in various environments and today we no longer have those issues. We’ve become more patient in the process and our faith has increased.

Have you received a lot of community support?

It indeed takes a village. Without the support of our family, friends, work and church families, we would not be where we are today with Shervin’s progress. Over the years, he has been in swimming, soccer, keyboard classes, he is a member of the 30th Company of Boys Brigade, took part in the Awana, Sunday School and children's church programs at our church. He attended Gleniston Center for Learning, Blairwood Academy, and now attends the Coral Academy at South Haven. All of these along with his speech therapy now make up his plan of care.

Who would you like to thank for their support of Shervin and of your family?

The list of people we would like to thank for their love and support over the years is as broad as the autism spectrum! First, we thank our loving and heavenly Father and Saviour, Jesus, who blessed us with Shervin and has been guiding and empowering us throughout. Without Him, we can do nothing. Shervin’s progress and growth are due to His loving provision and grace.

If you ask Shervin what he wants to be when he grows up, he will say, “a scientist”. We continue with speech therapy twice a week, help him meet his educational goals through special education, keep him engaged in activities that will help him develop spiritually, physically, and emotionally to help him become that scientist he wants to be. His Dad and I are also looking at the Gentlemen's Club as a possible addition to his plan of care for socialization and some graphic design classes since he loves to create words with playdoh and 3D modeling.

What is your advice for parents who may be worried about their child’s development but are hesitant to act?

Do not let fear paralyze you from getting the help you need for your child. Do not allow anyone to dictate or tell you that your child cannot or will not. Start with your pediatrician or a healthcare professional. Seek wise counsel and support. Do not let a diagnosis predict the outcome. Read up on symptoms and go with your gut instinct (we can tell when something is not right). Respond like Jochebed, Moses’s mother, and do not allow the ‘proclamation’ to determine your child’s future.